Not long ago, the fate of King Edward School was perilous. According to an article written by Calgary Heritage Initiatives in 2006, “the school … was closed by the Calgary Board of Education, or CBE, in 2001, was leased to the Francophone School Board until 2003, and has since sat vacant.” Vacant for a total of 12-years, an entire crop of young minds passed from kindergarten through graduation while the King Edward awaited a future designation or, if worst came to worst, demolition.

According to Calgary Heritage Authority:“This large three-storey sandstone building was constructed in 1912 during Calgary’s pre-First World War economic boom. It was built along with three other sandstone schools in Calgary that year.The [King Edward] school has served a variety of community functions throughout its history, including cadet training during the First World War and as a venue for community social events such as card games and dances. Notably, the school’s first principal, William Aberhart, later served as Alberta’s first Social Credit premier from 1935 to 1943.

King Edward School was constructed using rock-faced sandstone originally included 19 classrooms, a large ground-floor auditorium and separate entrances for the boys and girls. Given structural cracking and safety concerns, the west wing of the school was partially dismantled in 1978, using much of the original sandstone in the reconstruction. The school was closed to students in 2001 due to declining enrollment in the area.” 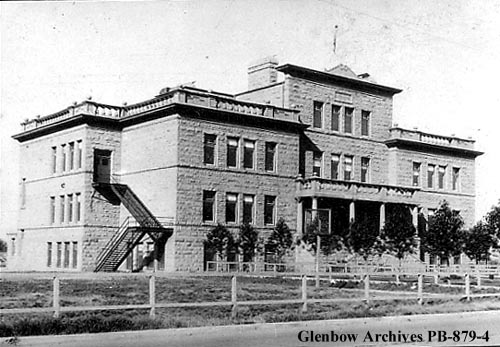 Image of King Edward School from the Glenbow’s archive

Luckily, the building’s historic significance and sandstone facade gave pause to the usual cry of “demolish it!” The future of King Edward looks much brighter these days – in 2012, Calgary Arts Development and The Calgary Foundation formally announced that the space had been purchased, and would be transformed into a “mixed-use hub that provides a dynamic and collaborative environment focused on the incubation and advancement of professional arts practice, social enterprise and community development in Calgary” (Calgary Arts Development’s Press Release). The sandstone portion of King Edward School will live on to celebrate a different kind of education and mentorship.

However, as you’ve probably guessed, PHANTOM WING wouldn’t be possible without the demolition of a wing of the building. In the 1960s, King Edward School added a new addition, including a library, a courtyard, an infirmary, ten or so classrooms, and so on. As part of the re-imagination of the building for cSPACE, the ’60s wing will be demolished – but not without briefly housing a temporary pre-demolition art exhibition marking the end of the wing’s architectural life-span. 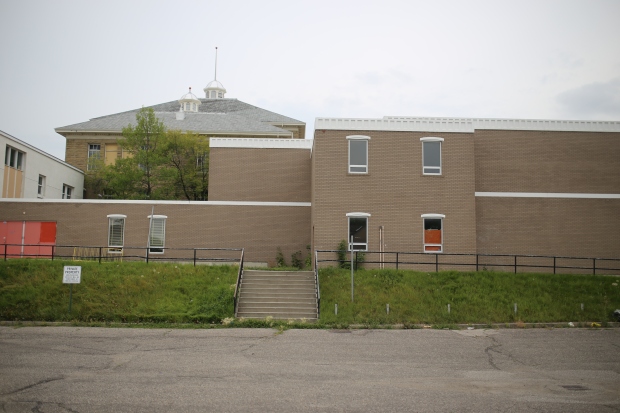 Diagram of cSPACE King Edward, as portrayed on cSPACE’s website

A NOTE ABOUT OUR SPONSOR:

cSPACE is a social enterprise established in 2011 to address an immense demand in Calgary for affordable, stable and sustainable space for artists, social entrepreneurs and non-profits. cSPACE’s mission is to connect people and ideas through places that ignite creativity, community, collaboration and change. To that end, they develop large-scale multi-disciplinary workspaces that transform the way creative people collaborate. cSPACE is a catalyst in neighborhoods where art, culture and creativity are expressed powerfully through place. We incubate successful creative and social enterprise by magnifying the scale, scope and impact of their ideas.

cSPACE King Edward will transform a 100 year-old sandstone school into a 21st Century hub for creativity.  With over 45,000 square feet of creation, production, exhibition and rehearsal spaces, cSPACE King Edward will support dozens of small organizations and the hundreds of creators they work with across all artistic disciplines.